12 student-athletes and 2 coaches participated in the first Oregon Girls Wrestling Cultural Exchange. This year’s team traveled through 3 provinces of Canada and 4 U.S. states visiting 4 universities that have women’s wrestling teams.
The team included 5 wrestlers from HRVHS & Coach Trent Kroll. The Eagle students were Emily Mitchell, Christine Marquez, Grace Miller, Anna Galbraith & Elena Kroll.
“The boys have had a Cultural Exchange opportunity through the Oregon Wrestling Association for almost 40 years. Why not start one for the girls?” said Coach Kroll
The team led by Kroll and Coach Beatty of Forest Grove HS first traveled to Simon Fraser University in Vancouver, British Columbia. At SFU the team worked out with the girls provincial HS team of BC and attended sessions led by colleges coaches and Olympian Daniele Lappage. The team stayed with host families from the Coast Wrestling Academy in Vancouver. Kroll have a huge “Thanks” to Coach Frank Mensah for all of his work hosting the team in BC. “Without Coach Mensah this trip wouldn’t have been possible!”
From BC, the team traveled east toward Alberta staying in Golden, B.C. first with a quick side trip to a hot springs, Lake Louise and the Banff Gondola where they got a phenomenal exposure to the beautiful Canadian Rockies. It was also the 150th anniversary of Canada Day!
After the sightseeing the team traveled to Edmonton, Alberta where Coach Owen Dawkins hosted the team at the University of Alberta. Once again the team worked out with the provincial girl’s wrestling team, this time from Alberta. In Edmonton the team was able to experience the largest mall in the Americas and ride the largest indoor roller coaster at the West Edmonton Mall. After a team dinner at Olive Garden, Coach Dawkins hosted the team at a very nice hotel. “Thanks to Coach Dawkins for all of his hospitality and hard work hosting Team Oregon,” added Coach Kroll.
After 2 wrestling sessions at the University of Alberta the team headed to Saskatoon, Saskatchewan and the University of Saskatchewan. Coach Daniel Olver, Coach Shane Bradley and Coach Collin Hoeft hosted the Oregonians. The US girls were hosted by local wrestling families. After a couple of workout sessions, the team participated in an outdoor dual meet against the Saskatchewan Girls Wrestling Provincial team. Each of the girls had 2 matches. The weather was so nice that the mats were so hot that the rules had to be changed to include only takedowns, no mat wrestling. It was a great experience with a big crowd. “Thank you to the Saskatoon coaches for going above and beyond with providing host families and organizing the outdoor dual. It was a phenomenal experience for our team. It will be hard to ever forget the dual in the park!” said Kroll.
The dual can be found on YouTube.
As the team headed south toward Montana from Saskatoon they took a quick side trip to the Dinosaur Museum that hosted the largest T-Rex skeleton.
Once in Montana, after being questioned briskly at the Canadian border about why we were crossing at such an obscure point, the team headed toward Great Falls and the University of Providence.
At the University of Providence, formally University of Great Falls, the team met and participated in a session led by the new Women’s Wrestling Coach at the university, Tony DeAnda. The team also made it back in time to watch the 4th of July fireworks in Great Falls over the Yellowstone River that night.
While in Great Falls the team stayed in the dorms on campus and ate at the food service. ” Thanks to Coach DeAnda & Men’s Wrestling Coach, Caleb Schaffer, for planning the stay and hosting us. It was perfect,” stated Kroll.
On the way home to Oregon from Montana the team spent the day at the Silverwood Amusement Park in Coeur d’ Alene, Idaho and then stayed the night at a hotel in Spokane, Washington.
The team returned safely back to Oregon on July 6th after the 12 day experience.
“It was an epic trip. The four universities that we visited with Women’s Wrestling Teams and their coaches went above and beyond hosting us. I believe this is a trip that the girls won’t ever forget. They were great ambassadors of the USA, Oregon, Hood River & HRVHS! Additionally, I can’t help but believe that they are better humans and wrestlers because of this experience. I can’t wait to see what we do next year for the 2nd annual Oregon Girls Wrestling Cultural Exchange trip,” said the Eagles Head Coach Trent Kroll.
In addition to the 6 who traveled to Canada this summer, the Eagles sent Adrian Ramirez to Japan on the Montana Wrestling Cultural Exchange team and Ryan Zeller to Russia after he qualified to be a part of the Oregon Wrestling Cultural Exchange team. 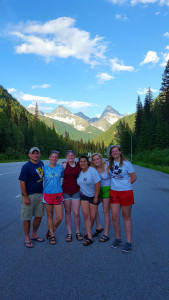 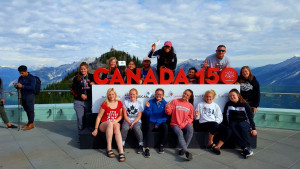 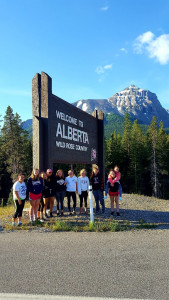 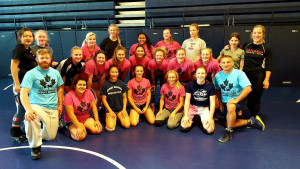