The Intermountain Conference Swim District held their championships at the Madras pool on Saturday February 15th. Swimmers from Hood River, The Dalles, Pendleton, Ridgeview and Redmond competed to vie for team titles, and the opportunity to win an event and punch their ticket to the State Swimming Championships next weekend at Tualatin Hills.

The Eagle girls dominated the IMC and took home the win by over 100 points. The boys fell just shy of bringing home the team trophy, by finishing 2nd to the strong Redmond team by 10 points – but improving from last years 3rd place team finish.

The Eagles started out by winning 5 out of the 6 relays in the morning session! The Girls 200 Medley relay of Sarah Arpag, Celilo Brun, Madaket Greenleaf, and Faith Ocheskey was the first event they won of the day. Then their 200 Free Relay of Abby McCormack, Chloe Bullock, Emma Titus, and Lillie Tomlinson won and punched their State ticket. The final 400 Free Relay of Faith, Celilo, Lillie, and Sarah combined for that top finish as well.

The boys 200 Free Relay and 400 Free relays consisting of Clayton Lee, Connor McElwee, David Hecksel, Luke Southall dominated the boys relays this year. They led from the start and never looked back.

The afternoon session began with a bang in the 200 freestyle. Madaket came from behind to win that one by a 5 second best time, Emma Titus grabbed 2nd with a personal best, and Jessica scored 6th with a 5 second drop. Chloe dropped 5 seconds also to dominate the consolation heat for 7th. Luke kept his cool and swam a personal best by over 2 seconds for the win, while Owen Summersett improved on his seed and placed 5th.

In the 200 IM Celilo was 2nd, Olivia Sumerfield placed 4th with a 6 second drop, while Campbell and Neilly finished 10th and 11th respectively. Clayton did a personal best and finished 3rd, while Lucas Elliott showed the consolation heat who was boss by winning that heat by over 4 seconds, while Adam Burke and Angus Kellems contributed to team points by finishing 10th and 11th.

In the 50 freestyle, Faith, Abby M and Lillie went 2nd, 3rd and 4th , highlighting the strength of this team. For the boys, David was 2nd, Connor 3rd and Tristin was 9th in this fast and furious event.

The Eagles showed their versatility and strength in their stroke events, by finishing 1-2 in the 100 fly for the girls and boys, with Sarah and Clayton winning this tough event, and Madaket and Gavin finishing 2nd .

In the distance event – the grueling 500 free – Olivia Sumerfield was 3rd and Chloe Bullock placed 5th for the girls, while on the boys side Owen was 3rd and Adam with an amazing finish was 4th place overall.

And the final two stroke events the Eagles showed that they can not only swim fast freestyle, but they are fast in all events. Sarah continued her dominance by winning the 100 back, with Campbell in 4th and Jessica in 6th, with Neilly swimming faster in finals than ever and winning the consolation heat for 7th. David won the event for the boys in a personal best time, while Zayd Ziada placed 9th .

And the excitement continued thru the last event, the 100 breaststroke where the girls had 4 out of the 6 finalists. Abby M grabbed 1st place, Celilo was 3rd and Emma grabbed 4th while Teddy Parkinson rounded out the final field by placing 6th. On the boys side, Gavin was 3rd, Lucas 6th and Henry Jones rounded out the consolation heat by finishing 12th.

The Eagles swim season will wrap up at the 5A State Swimming Championships February 21-22 at the Tualatin Hills pool in Beaverton, Oregon. 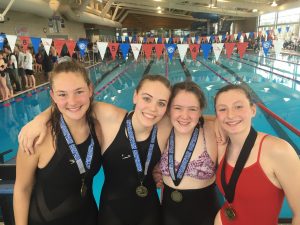 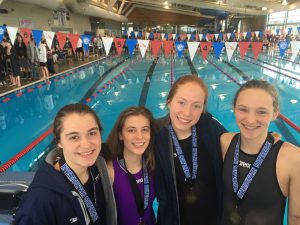 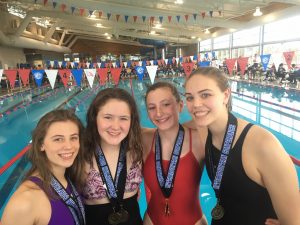 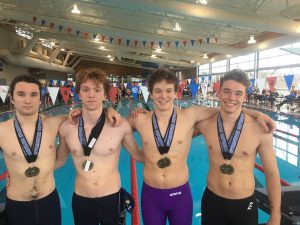 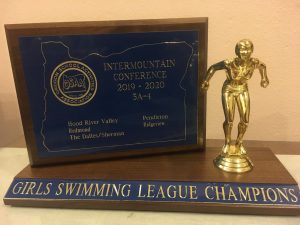